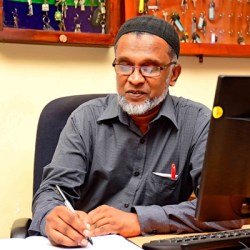 I thought of making use of the opportunity to write on the Council theme for 2016/2017; that is “Role of Chemists for a better tomorrow”, a theme that encompasses a wide area related to chemists and society at large and also to outline, in brief, some of the main issues confronting the Institute of Chemistry Ceylon (ICHEMC).

Role of Chemists and Allied Professions

Chemistry as a subject and Chemists as a profession are closely linked and need to be given due recognition in society. ICHEMC in association with its educational arm – the College of Chemical Sciences (CCS) – has a major role in taking this message forward.  It is an accepted fact that Chemistry is a central science, that Chemistry is everywhere; it is part of any sphere of life, be it agriculture, industry or even the household. However, the public perception of this subject (the image as it were) is not in keeping with the contribution made by those practicing the profession where chemistry plays a major role.

One of the most important functions of the new Council would be to take the message based on the theme to the next level through adequate publicity, to create an awareness amongst the public regarding the role of chemists in matters such as quality, quality assurance of consumer products including their safety etc. The Chartered Chemist could play a decisive role in such matters  given the authority (empowerment as it were) to assure the public through an appropriate certification process of all consumer products.

A great degree of responsibility lies with our membership; we need to wake up and generate sufficient publicity among the masses so as to enable us to establish a powerful arm in the national arena, a body that could exercise its authority thorough an assurance board of chartered chemists. We need to motivate the members to come forward in this endeavour which would benefit both the profession as well the general public.

Finally, I wish to make an appeal to all our staff, members, parents, students, the Alumni, and all well wishers to extend your fullest support in carrying forward the objectives of CCS and ICHEMC.